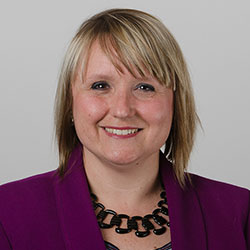 Since June 2013, Stéphanie has been the Director General, Emergency Management Policy and Outreach at Public Safety Canada. She is responsible for leading the development of emergency management policies and programs for the Government of Canada on files such as Disaster Mitigation, Communications Interoperability, Public Alerting, as well as other initiatives related to disaster risk reduction, emergency preparedness, response and recovery mechanisms.

Stéphanie works in close collaboration with all levels of government and various stakeholders, including the private sector, academia and non-governmental organizations. Some of her areas of focus include advancing whole-of-government initiatives to better predict, prepare for, and respond to extreme weather-related emergencies and natural disasters, including advancing a Flood Risk Plan for Canada. As of September 2016, Stephanie also leads the National Search and Rescue Secretariat, which used to be part of National Defence, with the mandate to lead the policy work on modernizing search and rescue for Canada.

From September 2008 to May 2013, Stéphanie was the Director General of Communications for Public Safety Canada. She headed the communications function for the department, as well as leading whole-of-government crisis communications efforts for the Government of Canada. She oversaw the public affairs coordinated response for the 2010 Vancouver Winter Olympics on security and public safety issues. Stéphanie has also held a variety of senior level corporate positions at the Treasury Board of Canada Secretariat.

Before joining the Public Service of Canada in 1998, Stéphanie worked for two years in Singapore in international marketing, public relations and event planning. Stéphanie holds a Bachelor of Social Sciences Honours degree from the University of Ottawa and a Masters of Public Administration (MPA) from Queens University.