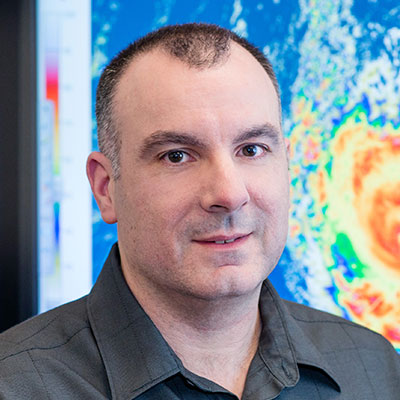 Bob Robichaud received his B.Sc. Degree in Meteorology from Northern Vermont University at Lyndon in 1995. After a few years as a weather forecaster in the private sector, Bob joined Environment Canada in 1998 as an aviation forecaster in Gander NL where he eventually became Aviation Weather Program Manager for Atlantic Canada. In 2003, Bob managed the National Aviation Weather Services contract with NAV CANADA and he has also written a book on aviation weather in Eastern Canada. Bob moved to Halifax in 2004 to fill the new Warning Preparedness Meteorologist role in Atlantic Canada where his primary focus is working closely with emergency management officials on a variety of different weather-related issues including training, exercising, and support during actual weather events. In his present role, Bob is the primary liaison between the Canadian Hurricane Centre and the emergency management community.