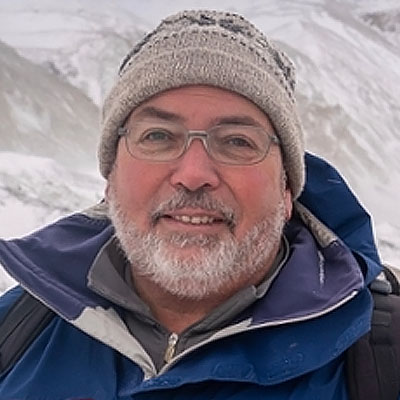 Dr. John Pomeroy is Director of the Global Water Futures Programme – the largest university-led freshwater research project in the world. At the University of Saskatchewan he is the Canada Research Chair in Water Resources and Climate Change, Distinguished Professor of Geography, Director of the Centre for Hydrology, and Director of the Coldwater Laboratory, Canmore, AB. He is a Fellow of the Royal Society of Canada, the American Geophysical Union and the Royal Geographical Society, is the 2019 recipient of the Miroslaw Romanowski Medal from the Royal Society of Canada, was the 2017 recipient of the J Tuzo Wilson Medal from the Canadian Geophysical Union and serves as Institute Professor of the Biogeoscience Institute of the University of Calgary and Adjunct Professor of the University of Waterloo and of Wilfrid Laurier University. He leads the International Network for Alpine Research Catchment Hydrology project of the World Climate Research Programme.

He is the founder and former President of the International Commission on Snow and Ice Hydrology, former Chair of the International Decade for Predictions in Ungauged basins, former President of the Canadian Geophysical Union, was the first Professor of Hydrology in Wales and was a Professor at the University of Wales, Aberystwyth, Research Scientist with Environment Canada and the US Forest Service and a NATO Science Fellow at the University of East Anglia. His primary research interests are in cold regions hydrology and water quality with an emphasis on snow redistribution and ablation processes, and the development of novel observational and modelling techniques. Dr. Pomeroy has authored over 350 research articles and several books that have been cited over 17,000 times https://scholar.google.ca/citations?user=1wATtH4AAAAJ&hl=en.

He serves, or has served as:

Professor Pomeroy has conducted research in western and northern Canada, the United States, Bolivia, Russia, Wales, Scotland, Nepal, China, Chile and Japan. He has given many presentations throughout North America, Europe, Africa and Asia.